Alzheimer’s disease is the most common form of dementia, affecting 1 in 10 people over the age of 65 years old. The only form of recognised treatment for Alzheimer’s patients are pharmaceuticals, which still continue to offer important benefits as long as they are taken regularly.

The new rTMS-COG treatment is designed to be in addition to, and not instead of, existing therapies. It does not treat Alzheimer’s but, instead, stimulates the remaining healthy brain cells in patients with mild to moderate Alzheimer’s disease.

Whilst not every patient will have the same response from rTMS-COG – patients, carers and doctors have reported the following improvements, classically after about 6 weeks from the end of therapy: 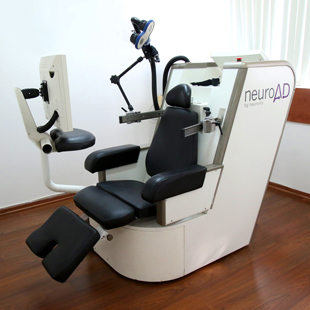 “We are now ten months down the road since she finished her treatment, and I have to tell you that she is still very well. She is much calmer, and more relaxed, and although her short term memory is still not good, it is actually much better than it was before she started her treatment.”

“…we noticed a marked improvement in our mother’s mood, her confidence and her willingness to socially interact with friends and family.”

“How did it change my life? I feel better than before, I can talk with everybody without losing my mind…I have a lot of hope that I will be better and not as I was.”

“Suddenly she improved and it was like before the disease started. And concerning the names of the family, she used to sometimes change the (names of the) children etc., and now she recognizes them, and this is very important for them”.